Sir Stirling Moss gets a win 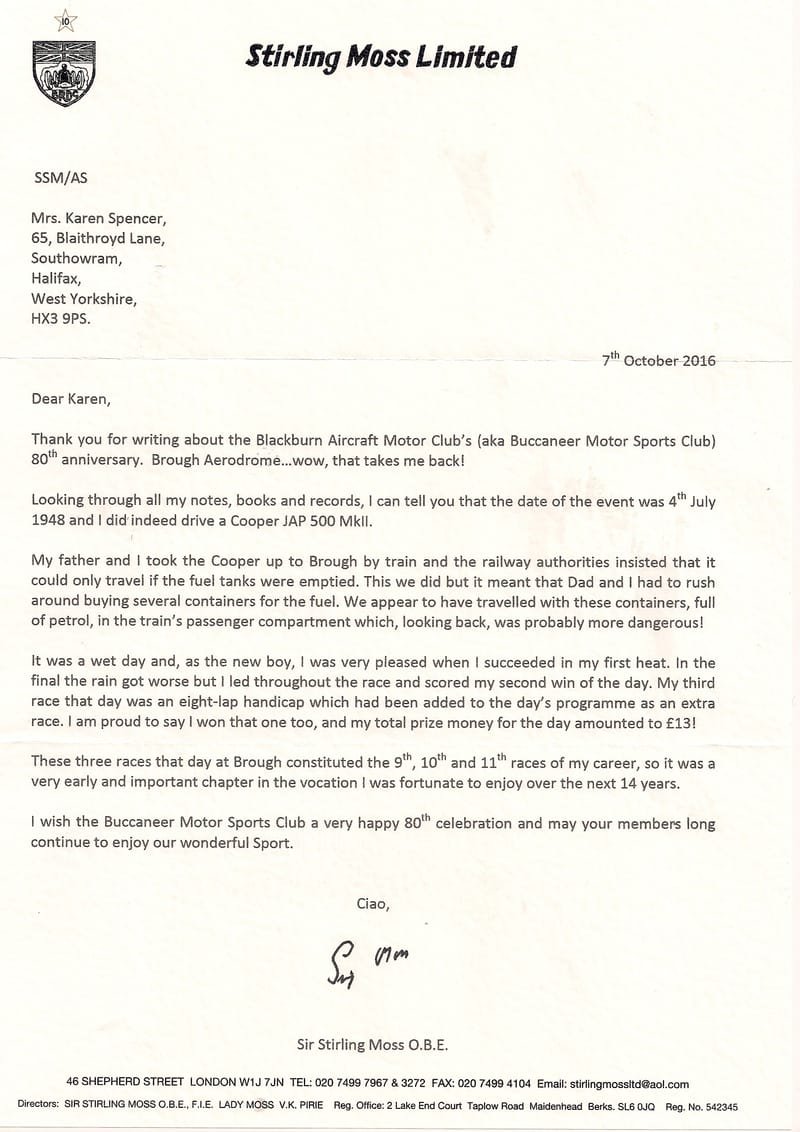 By permission of the Blackburn Aircraft Motor Club, the 500 Club was enabled to stage a series of races for their twanhers over an excellent 0.65-mile circuit. laid out at the Blackburn Company's aerodrome at Brough. An excellent motor-cycle entry made up the main part of the programme, and, in spite of continuous torrential rain until the end of the afternoon, some 5,000 spectators attended and stuck it out under very discomfiting conditions.

The 500 Club was fortunate to be invited to this Blackburn meeting, for the organisation was first-class. It will be recalled that the first 500-c.c. circuit race happened at Gransden last year and that insufficient entries were obtained for Brough. This year 16 Class I cars entered and 9 started. Heat 1, over 6 laps, was contested only by Truman's bodyless, drilledchassis Marwyn and Lang's neat, alloywheeled Cowlan, which, however, had no engine cover, although its driver was protected by a mica screen. Lang led from the start, but Truman caught him and was some six lengths ahead after one lap. Lang then spun at the hairpin bend, where Truman also indulged in hectic skidding, allowing Lang to run on alone to win, at 47.6 m.p.h. The Aikens, MeGlashan's Marwyn-J.A.P. and Coldham's Cooper came out for heat 2. MeGlashan jumped the start, and at the second flagging-away Coldham got a very momentary lead before the Marwyn went by. Aikens had foul luck, his gearbox giving up the ghost as the clutch went home. After a lap McGlashan led by about five lengths from Coldharn, who, however, was closing the gap. Then the Marwyn spun at the rain-drenched hairpin bend and retired, Coldham driving steadily to victory, at 48.5 m.p.h. Heat 3 saw Moss, the 18-year-old driver, repeat his fine showing at 4righton and Prescott, his Cooper, beautifttlly handled, leading throughout. Dryden 's Cooper held second place, with Lord Strathearron's Marwyn third, and seeming to suffer gear-change trouble. Dryden spun at the hairpin, but continued. Moss averaged 48.9 m.p.h. The final again saw Moss complete master of the situation, his Cooper leading throughout. Dryden picked up a place on Coldham and Truman was fourth, which order held throughout. MOSS averaged 52.0 m.p.h. this time. The original programme was altered . and an 8-lap 509-c.c. Handicap announced, in which Truman, Strathearron, MeGlashan, Dryden, Coldham and Moss were started with approximate equal intervals between them. An excellent race resulted. Strathearron led lap 1 from Truman, Moss, Coldharrt and McGlashan, Dryden again spinning at the hairpin. After two laps Moss had closed appreciably on the blue Marwyn, while Dryden had passed MeGlashan. On lap three both Coldham and Dryden overtook Truman, and goiner into lap four Moss passed down the straight, after using the whole road at the hairpin. Dryden spun again and was nearly lapped by Moss, who was in full control of his car and won easily at 51.5 m.p.h. from Strathcarron, Coldham and Truman. Dryden recovered and practically caught McGlashan at the line. The speeds set up under the appalling conditions by the cars were very creditable, the fastest 500-c.c. motor-cycle race being won at 52.15 m.p.h. and the fastest sidecar race at 51.6 m.p.h. Moss was hand timed in practice at 54.4 m.p.h. The lap record stands at 60.8 m.p.h., done in the dry.  By courtesy of North Sea Air Transport we went up to Brough from Hanworth in 1 hr. 12 min., about as comfortably as in the better provincial omnibus, as is the Anson's way, and returned, in 1 hr. 29 min., in the more sedate comfort of a fully-loaded D.H. "Dragon Rapide," being overtaken en route by the Anson, now containing the Moss equipe, which had taken off after us. It will be recalled that very tricky flying weather prevailed on July 4th, so credit is due to this charter concern for the efficient transport it provided. North Sea Air Transport, Ltd., can undertake charter-flying with Avro " Ansons," D.H. " Rapides " and Miles "Messengers," and you may care to note that they are based at I I anworth—Telephotte No.: Feltham 3678.